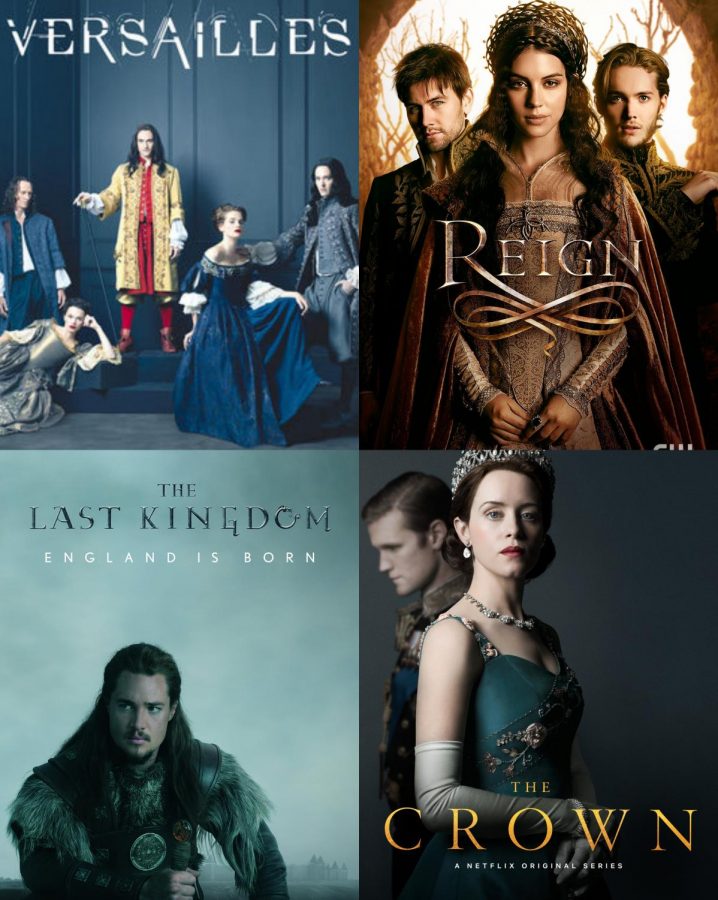 courtesy of The CW, Netflix, Canal+ and BBC

Recently, the demand for period TV shows, or TV shows set in a historic time period and demand has gone up. Most period shows have between three to five stars, and the ratings left by viewers glamourize them even more. Period shows transform the black and white photos of the past into color and allow us to connect with history in a unique way. Instead of watching TV shows that are completely fictional, a learning aspect is now included.

Now, you can relate to Queen Elizabeth or Queen Mary of Scots on a more personal level. A good period show should be realistic and close to the actual events that occured. But the episodes shouldn’t pace historic facts one after another, either, or it would be  labeled as boring. The main characteristic period shows should have is the buzz of life in the background. After all, there was always something happening during any historic time period and that important part should be portrayed.

The first period show is “Reign,” an American drama series airing on The CW which has an 86 percent Rotten Tomatoes score and a rating of 7.5/10 on IMDb. The show focuses on Mary Stuart, the queen of Scotland, and her life in French court with her husband, the future king of France. It loosely follows events that occured in the late 1500s, and so  but the costumes are similar to the clothing worn back then, complete with the detailed lace and corsets.

“Reign” really captures the strength and power of Mary, making her a confident woman.  While women in history were always treated less and were given ‘feminine’ jobs, “Reign” breaks all the barriers for women in history and gives a sense of empowerment to the audience.

As a result, “Reign” is an moving and exhilarating show emulates life and the struggles as a female ruler.

Meanwhile, “Versailles,” a period drama set in 1667, has a rating of 7.9/10 on IMDb and a 66 percent Rotten Tomatoes rating. It is set in Paris, and depicts 28-year-old King Louis XIV taking full control of France, and the chaos during that time.

Betrayal, love triangles and politics are thrown around in the span of two seasons. Most characters on the show are real historical figures, but others, like Fabien Marchal, the king’s chief of police, and Jacques, a gardener, were made up to add to the drama, which isn’t the best if you’re watching these shows for the history. Overall, the show is very fast paced and can be overwhelming, but it is also fascinating and entertaining to see the steps King Louis XIV took in order to have full command of France.

Another highly rated period show is “The Crown” on Netflix. Set in the 1940s, this show follows the real-life events of Queen Elizabeth II and her unstable marriage, arduous life and the stress of being queen. In the beginning of the first season, the death of George VI, the queen’s father, and Queen Elizabeth II’s immediate transition from princess to queen is shown. Having two seasons in total, reviews on Google left by the audience sum up The Crown as “phenomable” and “remarkable,” and I don’t disagree.

The hardships that Queen Elizabeth II faced in her past would have felt like too much for an adult to handle, but the queen came up with effective solutions putting her country in a better spot politically and financially. Her accomplishments as a monarch are high in numbers and are also shown in “The Crown.” As a result, “The Crown”  is another captivating period show dedicated to celebrating strong women and female rulers.

Rated 8.7/10 on IMDb and 90 percent on Rotten Tomatoes, the fifteen awards this show won reflect on its spectacular portrayal of being a queen, mother and wife along with politics and drama.

The last period show is “The Last Kingdom,” a fictional story based on grim history. Having a rating of 8.8/10 rating on IMDb, “The Last Kingdom” is nothing short of magnificent. While most of the characters were real people,the story is told as a narration. The show follows the main character Uhtred, an actual historical figure from 10th century, as he fights for his ancestral land and has to make the difficult choice between family and his birthright.

This show really captures the Viking era and the greed for power back in the late ninth century. Additionally, “The Last Kingdom” brings to attention the bond between family and the importance of loyalty which makes it even more exceptional and enjoyable.

Period TV shows have their own charm, which makes them so addicting. However, each show is also preserving history, allowing the audience to learn about life in different time periods and the hardships people endured. For most, history class is boring but period shows are an entertaining and new way to interact with the past and learn about life back then.