Teachers aren’t the only part of the staff that have been added this year. A new guidance counselor, Lillie Phares, has also joined the school recently. Phares had worked at HHS previously two years ago, when she was filling in for Ms. Deathridge while she was on maternity leave. Before that, Phares had worked at Cupertino High School as a college and career advisor and a guidance counselor. Once she heard that a position had opened up, Phares came back immediately, she said. 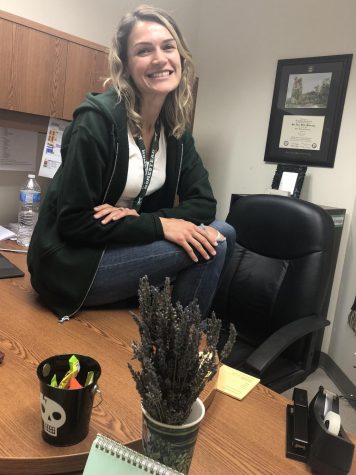 Similarly to a few of the other new teachers, Phares didn’t originally want to be a guidance counselor.

Phares believes that a lot about being a guidance counselor is being patient, being creative when coming up with solutions, and being flexible with those solutions, especially since there is always more than one way to approach a problem. There’s a lot of moving pieces and everything is super collaborative when you’re a guidance counselor, said Phares.

“[S]olutions don’t pop up overnight. It takes time to learn about a specific student, and realize that there are many ways to approach a problem or challenge, and that it varies from student to student,” Phares said.

Phares also stressed the importance of connecting what a student is doing in high school right now to what it means for their future, and ways that guidance counselors can help with that.

“It’s one thing to get all A’s in your classes, but what does that mean in your future? You’re not going to be in school the rest of your life. We want to make sure students have the necessary skill set in order to thrive not just academically, but socially, emotionally, professionally, [and] personally,” Phares said.

Outside of her job as a guidance counselor, Phares actively engages in sports, being a dedicated Warriors and Steelers fan. Cooking is another thing that Phares loves.

“I watch any sort of chef show that’s available to my dispose on Netflix, [and] Chef’s Table is one of them. [I watch] a lot of food documentaries. I’m just so fascinated by the culture that comes with food, and the culture behind cooking. I love that,” Phares said.

In regards to her time at the school, Phares has already expressed how special HHS is.

“Homestead’s fun. There’s great teachers, administrators, [and] classified staff. It’s a true gem in my eyes in my experience, [and] this is the third school I’ve worked at in the last six years,” Phares said.