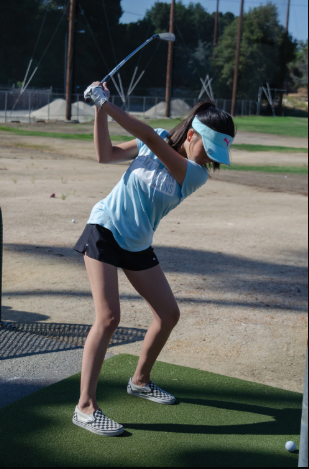 With the start of the school year, the fall sports season has commenced.

Though the season is notorious for more popular sports like football, smaller teams are also taking stage.

One such team is girls varsity golf. With a maximum number of 12 available spots on the team, 13 girls participated in the three-day tryouts, taking place at both the Sunnyvale and Sunken Gardens golf courses.

Most of the girls who participated in tryouts were veterans on the team, and plan to continue playing throughout high school. These former players have already established a tight bond with one another.

In past years, golf coaches struggled to get players to come and tryout, coach Kyle Bonvechio said. That struggle no longer exists, thanks to this group of girls.

Bonvechio, who has coached both the girls and boys varsity golf teams for the past three years, credits this to the spirit of the players.

“Whether it’s a good shot, a bad shot, they’re always there cheering [their teammates] on and supporting them,” Bonvechio said. “That’s a huge aspect [of] our success [in team unity].”

Though the closeness of the group has led them to success, some players said they find themselves sticking to smaller squads.

“There [are] groups on the team, which is bad,” junior Naomi Danner said. “We can only play in groups of four on the course, so then we get super close to those people in our group. I feel like we’re closer to some people than we are with others, because we don’t really do team bonding.”

Though team chemistry is important to the success of the team, it isn’t nearly as important in golf as it is in other sports, with golf being such an individual sport, junior Morgan Wong said.

“We’re not as close as most other sports teams are, like a volleyball team,” Wong said, “but we still talk to each other.”