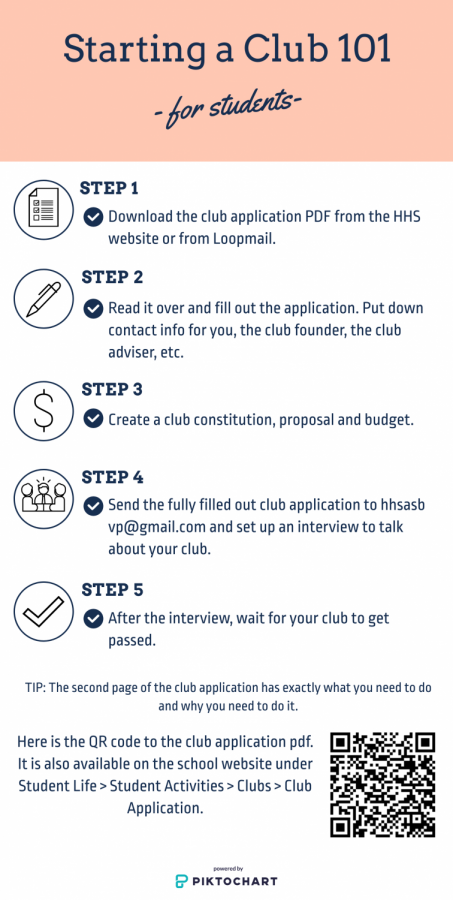 The new club application process begins with figuring out the purpose for your club and expanding from there.

Clubs offer students paths through which they can explore new experiences and find their passions.

In an attempt to make opening new paths easier and give students more options, the club application process has been streamlined for ease of use. New additions to the process include a checklist, rather than a rubric, and no required signatures. The checklist will predict if the club will have a positive impact to Homestead, if it’s feasible, and if it will have student interest, club commissioner and sophomore Ethan Mahimainathan said.

Mahimainathan said the reasons for altering the requirement of signatures in the process of approving a club centered around the ease with which signatures can be achieved.

“Anybody can go out in the quad and ask for 15 signatures,” Mahimainathan said. “The signatures [weren’t] really a good way in determining whether a club would succeed or not.”

“After you submit your application, you will be contacted by our club commissioner and ASB vice president,” Kirby said. “They’ll set up a meeting with you and your adviser and club officers, as well as another ASB student from the class. You’ll sit and you’ll talk about your club, and they’ll kind of give you the details, things like that.”

One of the reasons that leadership has gotten rid of these requirements is to make it less challenging and intimidating to start a club on campus. Students who want to start a new club will no longer need to jump through as many hoops to get passed, Kirby said.

“We want to make everyone feel like they can start a club and [that] it’s not a difficult process,” ASB vice president Carolyn Shan said. “As long as you fulfill the requirements — [the club will] have a positive impact to Homestead, it’s feasible and it will have student interest — we will pass the club.

The requirements to start a club have also been reduced to give clubs the benefit of the doubt that they will succeed, instead of denying a club based solely on the belief that it won’t be popular, Mahimainathan said.

“A lot of the rejections of previous clubs were them thinking that it wouldn’t pass, it wouldn’t be feasible and people wouldn’t go to [meetings],” Mahimainathan said. “We took that out completely, because we believe that the club should have a shot at becoming successful. We shouldn’t determine whether you’re going to be successful or not.”

Not only is it now easier to go through the club process, but those who would like to start their own club on campus are able to do it at any point in the year, Kirby said.

“It’s also a rolling application, so we don’t have a due date,” Kirby said. “The last time we’ll take applications to really meet with clubs will be in March… so it’s not just restricted to a certain date.”

Because the club application has been refined to require less presentation, the responsibility to get it passed is now focused on the students who are trying to create a club on campus, Kirby said.

“We do require more involvement on the students’ part,” Kirby said. “[There is] a lot more legwork, as well as being thoughtful with their process and why they want to start a club.”

Now is an ideal time to start applying to create your own club on campus, Shan said.

“I hope that more people will come and start applying, [because] we have the necessary budget needed to support everyone,” Shan said.