A great season ahead: girls varsity basketball goes into new season with confidence 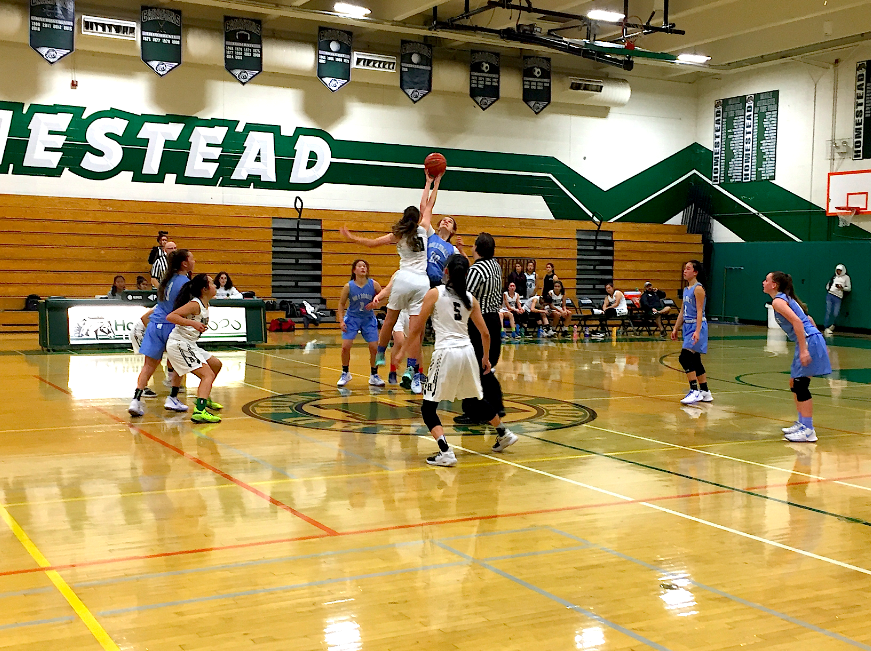 Freshman Tatum Leuenberger reaches high for the ball during a tip off.

he girls varsity basketball team, playing under head coach Becky Chiu, is off to a great start this season. This can be attributed to Chiu’s strict but effective coaching tactics and the girls’ confidence, sophomore Ellen Cheng said.

Cheng said Chiu pushes them to achieve the best they can with her rigorous coaching tactics.

“Every practice, if we don’t score a certain amount of baskets in a certain amount of time, we have to run or do push-ups or burpees,” Cheng said. “She definitely pushes us really hard … but it helps us and I think she’s really made us stronger as a team.”

Chiu also finds specific techniques to work on and highlights them for the players during practice, senior Kendra Wong said.

“I think it’s really good that she emphasizes defense, because that’s really what we can control,” Wong said. “Offense comes with the flow of the game, but I think she puts a really good emphasis on defense and the intangible things.”

The amount of hard work the girls put into improving their game could really be seen on court during recent scrimmages, Wong said.

“We were just spaced out really well and we knew where we were supposed to be [on the court],” Wong said.

Aside from their committed practices and dedication, Chiu said she feels the team’s eagerness contributes greatly to their success.

“I think [the team’s greatest strength is] their mentality of just being hungry [for the ball] and confident,” Chiu said.

Although the team is doing well so far, Wong said there are still a few kinks the girls need to work out.

“I think [we need to work on] ball movement, for sure, on offense,” Wong said. “We got stuck in some situations, but I think we just need to move the ball around more and look [to pass to the players] inside the key.”

Cheng said closing out the defenders after a shot has been made is another skill the team can improve on.

Chiu said she is proud of what the girls have done so far and looks forward to the season.

“I feel really good [about this season]. If we do what we need to do, we should go very far,” she said.