Fires continue to tear through California 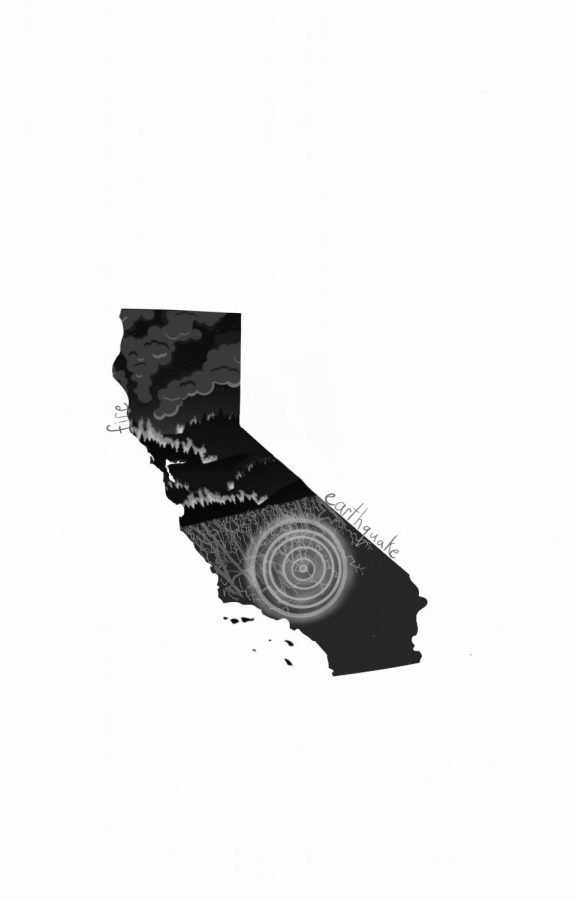 Combined with the threat of an impending major earthquake, California wildfires are a growing issue that have affected many and will likely continue to do so.

By Leila Salam and Dexter Tatsukawa

hether direct or indirect, the fires in California have had a number of effects on the state’s residents. This has not gone unnoticed by the district, which has had to contend with these difficulties. For example, PG&E’s power cuts were a situation that was of great concern for school administration.

“We were concerned that we were going to be a part of the emergency shut offs,” principal Greg Giglio said.“ [It’s] a pretty significant issue.”

Illustration by Leila SalamCombined with the threat of an impending major earthquake, California wildfires are a growing issue that have affected many and will likely continue to do so.

Public safety officer Jose Marinas of the Sunnyvale Department of Public Safety said that wildland fires, fires in non-urban areas, or rural areas, have been a growing threat.

In 2018, California experienced its most devastating fire, the Camp Fire in Paradise, which destroyed more structures and claimed more lives than any other in California’s history, according to ABC7.

Marinas said that part of the reason for this increased destruction is the fact that fire season lasts longer than it used to, now sometimes extending through the entire year when it had previously just spanned from June to October or November.

The extended fire season affects fire stations differently as not all deal with every fires. The station Marinas works at, for example, Sunnyvale Fire Station 3, primarily deals with fires in its immediate vicinity. For wildland fires, there are specific stations set to fight them; in Sunnyvale, it is Station 4, Marinas said.

For such stations, the extended fire season means more use of preventative measures, such as the clearing of flammable brush. These stations are the ones dealing with local fires, such as the one in Kincade, which began in October, and, according to the California Department of Forestry and fire protection, burned 77,758 acres and took 13 days to extinguish.

In addition to the destruction caused by recent fires, California is experiencing growing difficulty battling fires.

According to U.S. News, in California, climate change is leading to a hotter, drier landscape and increasingly scattered home placement, making firefighting more difficult. Additionally, it is difficult to completely suppress wildfires, causing flammable materials to build up.  In 2017, California spent $2.9 billion in fire suppression efforts, according to U.S. News.

PG&E is also experiencing consequences for its role in creating fires. According to PBS, of the 20 most destructive fires in California, six have been shown to be linked to the power company.

As a result, PG&E is expected to be paying $13.5 billion in compensation to victims of wildfires started by the company.