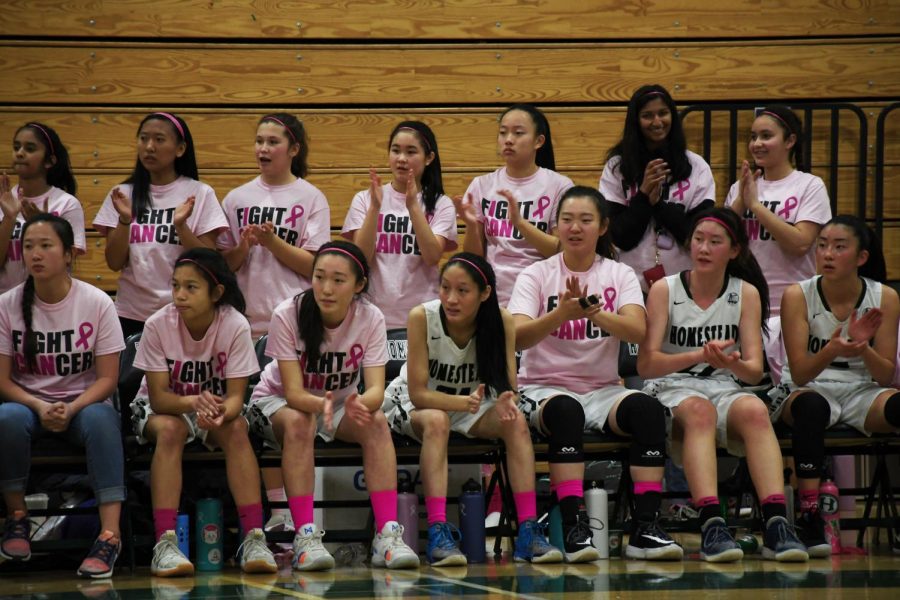 Girls basketball held their annual Pink Night in the large gym with the support of the Homestead Cancer Society as the theme for one of the “Quad Nights” on Jan. 17. The event raises awareness for breast cancer and brings more people out to support the team, senior and co-captain Kendra Wong said. The girls played MVHS, defeating them 54-23.

Pink Night began four years ago soon after varsity coach Becky Chiu started coaching the JV girls team. She said it was an event that she was exposed to while playing for De Anza College, and believed it needed to be more than just wearing pink.

“The first year was definitely not as extensive as this year,” Chiu said. “We went from shirts and a donation jar to selling Tpumps with Homestead Cancer Society and having a speaker from Cancer Carepoint talk during the boys’ halftime about their nonprofit.”

The topic is near to players who have had relatives affected by breast cancer, especially in past years. A player’s mother spoke at the event last year, detailing her battle with the disease, senior and co-captain Izzy Sathy said. In addition, the topic has a more heartfelt effect, because of the demographics of the team.

“I think being a girls’ program, obviously, many women are affected by breast cancer so [we’re] just kind of trying to use our platform to raise awareness for it,” Sathy said.

According to the Center for Disease Control, breast cancer is the most common cancer in women. An estimated amount of around 42,000 deaths were predicted to happen in 2019, according to Cancer.net.

“I believe it’s important because breast cancer is, unfortunately, an illness that can hurt anyone, men or women,” Chiu said. “It’s important to know the symptoms, as well as resources, when people are going through this tough time.”

In addition to Pink Night, the girls basketball team introduced “Mental Health and Awareness Night” to let students know it’s okay not to be okay, Chiu said. She said the night resulted in positive feedback from teachers.

In regards to their game, Sathy said the team has been doing exceptionally well in the season, especially with the arrival of new, younger players.

“We have a really deep bench.” Wong said. “All the nonstarters contribute so much to the team.”