The words that you say have harmful implications towards marginalized groups 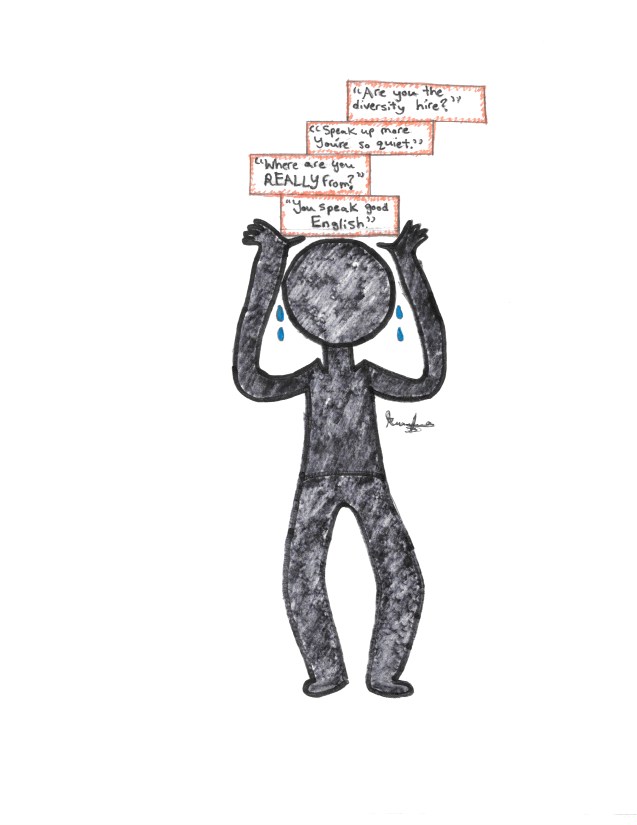 Microaggression can be just as detrimental as outright racism or sexism. The world needs to be more aware and sensitive of the way words and actions can hurt others.

We were at a hotel in Los Angeles, near Universal Studios and had gone to the breakfast buffet. I remembered that trip being one of the most exhilarating times of 2019, but this following experience significantly dampened my mood. My mother talked to the waiter and ordered our food. He was polite to us all and smiled as he took our orders. However, when the waiter later came back to give us the bill, my father had joined us. The waiter simply handed the bill to him. I knew from my mother’s tight expression that something was wrong.

At first, I was confused as to why this was a bad thing. After all, the waiter had to give the check to someone. But, it was my mother who talked to him and explicitly explained what we all wanted, yet, my father was the one who received the bill.

These small gestures hide bigger implications. In this instance, the waiter showed his mistaken belief that men were the ones who handled the money. Simply put, the waiter’s subtle gesture resonated just as much as spoken words.

Microaggression is defined by a comment or action that expresses a bias against a group of people. Microaggressions, like what I witnessed, are often unconscious. However, they have the same impact as intentionally targeted words.

Some examples of unintentional comments, according to the University of Minnesota School of Public Health, include statements like: “Where are you from?” or “You speak good English.” While these comments may seem like normal statements, they can make someone feel like an alien in their own country. Asking where someone is from implies that America is not their true home and complimenting their English skills gives the impression that it is surprising that they can speak English. In reality, English is spoken all over the world.

In a New York Times article by Hahna Yoon, she writes: “the buildup of these everyday slights has consequences on a victim’s mental and physical health that cannot be overlooked.” Many like Yoon compare microaggressions as a “death by a thousand cuts.” According to an article by the Center for Health Journalism 2017, one study showed how Native Americans diagnosed with Type 2 diabetes experienced racial microaggressions from health care providers. A correlation was found between microaggressions and their self-reported histories of medical conditions such as heart attacks.

It is hard to know when to draw the line in terms of responding to microaggressions. Dr. Kevin Nadal, author of “A Guide to Responding to Microaggressions,” came up with five questions to ask yourself. The first three ask the consequences of responding to the situation, such as physical safety, whether the response will lead to an argument and how it will affect a relationship with a person. In contrast, the remaining two questions ask whether not responding could lead to regrets or send the message that the behavior is acceptable.

It is a decision that we all have to make for ourselves.

When talking to someone, it can be hard to know what to say. The most important thing to remember, according to the New York Times, is that you don’t want to seem like you are attacking the aggressor. The goal is to change their mindset. Instead, asking for clarification about their statement or stating how their words or actions made you feel can be a lot more effective.

It is important that we keep these discussions alive and talk about our experiences with others. According to the New York Times, learning to find your own boundaries and getting assistance from friends and family are some of the most crucial steps in handling microaggressions.

Unfortunately, microaggressions are very common in our world today. According to USA Today, a study in the Journal of Multicultural Counseling and Development found that out of counselors who had clients with trauma related to their race, 89 percent considered subtle acts of racism as contributing criteria. This means that everyday slights have just as much an effect as outright discrimination.

We all have our own internal biases. It is important, according to USA Today, that we listen to others and not become defensive. None of us are perfect, but we need to realize how our words have a serious impact on others and think before we speak.

As Columbia University psychologist Derald Wing Sue said: “Microaggressions hold their power because they are invisible, and therefore they don’t allow us to see that our actions and attitudes may be discriminatory.”