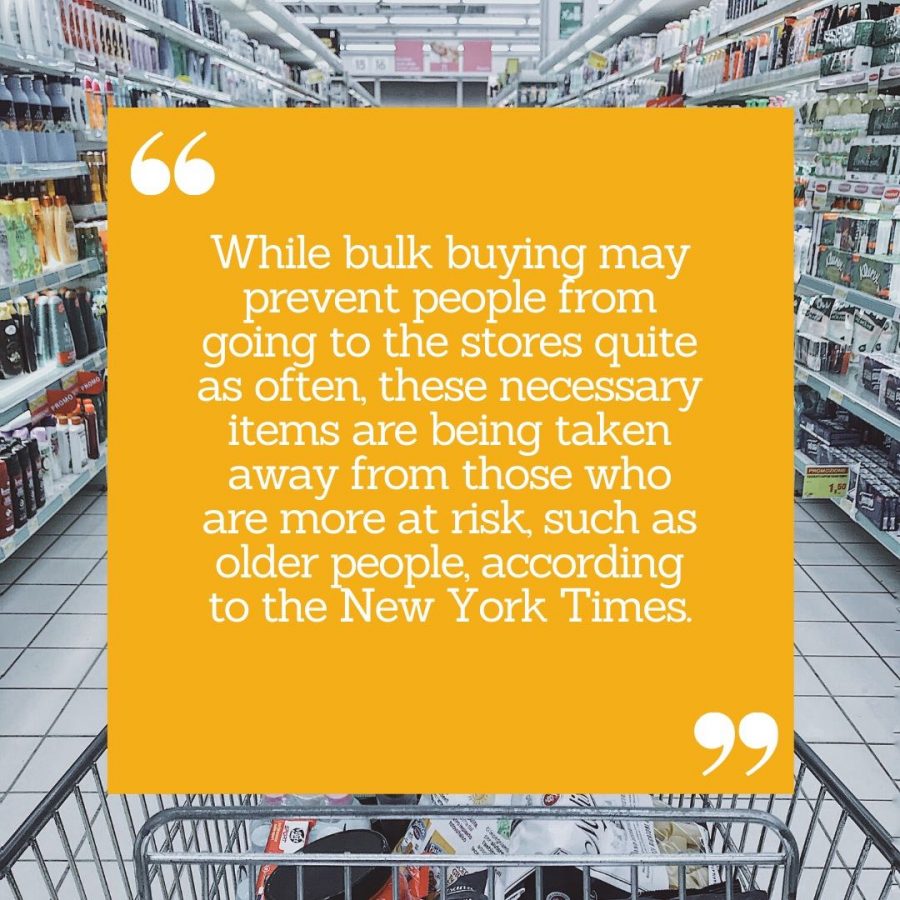 Panic buying leaves less important items for those who need them.

The coronavirus outbreak  has resulted in a wave of panic buying as people desperately try to stock up on goods, according to the New York Times.

Junior Yumiko Bellon, who works in the same complex as Trader Joe’s, said in the past few weeks, there has been a dramatic increase in shoppers.

“People line up around the building [to get into Trader Joe’s],” Bellon said. “[To keep everyone safe], they have cut down the number of people that they allow into the store [to 20].”

Instead of buying groceries periodically, people choose to buy large quantities of all items. The U.S. is currently seeing a massive spike in purchases of pasta and canned foods in particular, according to Statista.

“[People are buying] large quantities and they are bringing too many people in the store with them,” Zanotto’s employee Danine — who declined to give her last name — said. “They are only supposed to bring one person and sometimes I see families here.”

Bellon said seeing people buy large quantities of food items makes others feel like they should stock up, as well.

“A lot of people that are in need of those [items], such as people who are more affected by the coronavirus, aren’t able to get them,” sophomore Shelby Riemenschnitter said. “Having to go back to the store a lot to just try and look for basic necessities like toilet paper, kleenex and paper towels is really challenging for them.”

According to the New York Times, the best thing to do during the spread of COVID-19 is stay away from other people, particularly if they may be part of a vulnerable population.

While bulk buying may prevent people from going to the stores quite as often, these necessary items are being taken away from those who are more at risk, such as older people, according to the New York Times.

“[People] went and bought all the frozen food and all of the non-perishables,” Bellon said. “I think some people are not taking [the effects of their actions] seriously and they are just frivolously buying things.”

In response to the increasing number of shoppers, stores, such as Zanotto’s and Whole Foods, are taking measures to prevent the spread of the virus and to make sure important items remain available.

“We are trying to put up the stock as fast as possible,” Danine said.“We are a lot busier trying to provide for people’s needs.”

Both Zanotto’s and Whole Foods are opening one hour early for seniors, wiping down their registers every 30 minutes and limiting the number of key items per purchase, Danine said.

According to the Centers for Disease Control (CDC), older adults and people of any age who have serious underlying medical conditions are more at risk of the harmful effects of the virus. By opening an hour earlier, these stores are helping to prevent seniors from being exposed to COVID-19, Danine said.

Danine also said the stores are encouraging their customers to take proper precautions, such as maintaining social distancing when possible.

In a letter to their customers, Zanotto’s said these measures are more important than ever.

“Zanotto’s commitment to help our community is an ideal we take to heart in good times and bad,” the letter said. “We will continue to work hard to keep our store open so we may support our family, friends and community.”