Football is dying from a culture of toxic masculinity 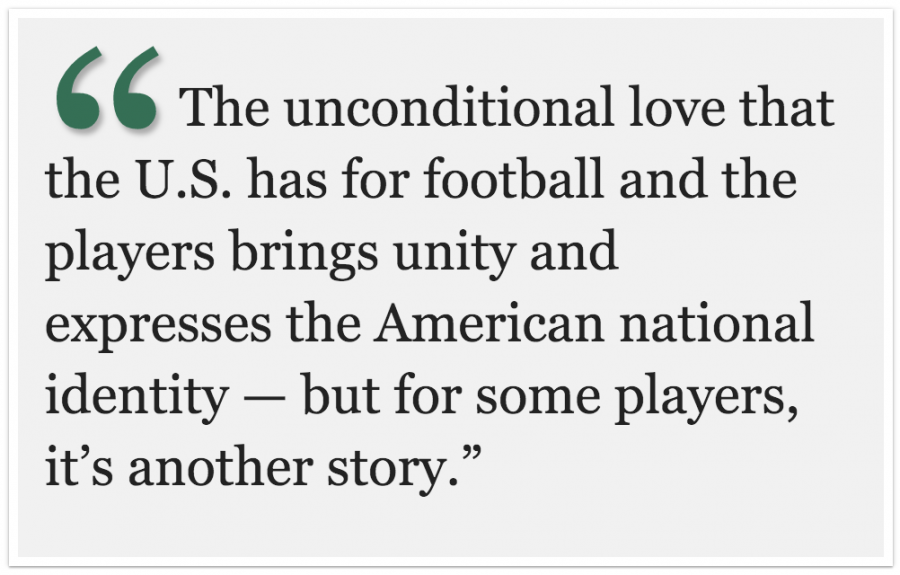 Being a football player, whether it’s for the NFL or the school team, comes with a lot of glory. With all of the intense practices and the heavy toll it takes on the players, viewer rates continue to increase each year.

More than 182 million people watched the regular NFL season and the average viewership increased five percent, according to Broadcastingcable.

The unconditional love that the U.S. has for football and the players brings unity and expresses the American national identity — but for some players, it’s another story.

In an average NFL game, there are around 6.9 injuries, according to the Washington Post. This large number is overlooked in many instances, creating an unsafe environment for players. Injuries such as subconcussive injuries, concussions, fatigue, memory loss and chronic traumatic encephalopathy (CTE) are only some of the dangerous side effects of playing football.

Out of 111 brains of NFL players that were examined by a neuropathologist, 110 came back positive for CTE, according to The New York Times. The players’ ages ranged from 23 to 89 and they played different positions on the field such as linemen, tight ends and quarterbacks.

The alarming part about CTE is that it can only be identified and diagnosed after the player has passed away. This has caused concern as more studies are coming out about CTE and the destructive harm it brings.

To add on to this dangerous disease, the NFL has denied and hidden information that long-term brain damage can result from concussions, according to BusinessInsider. On Tom Brady’s official record, there is no reporting of any concussions but when his wife, Gisele Bundchen was interviewed by CBS This Morning, she disclosed that Brady had in fact dealt with several concussions, according to the Neurologic Rehabilitation Institute.

Hiding brain injuries in the NFL has become a very common issue but it only ends up hurting the players the most. To add on, the NFL has taken no action on this issue and overlooks it as if a player’s life means nothing, according to The New York Times.

In 2013, retired players accused league officials of covering up the risks of concussions and filed a lawsuit against the NFL, which ended with the players getting a $765 million settlement, according to The New York Times. To the NFL, maintaining a player status is more important than protecting them from the dangerous effects of concussions.

While the big physical toll placed on football players is evident, an underlying issue that players also face is an emotional and mental struggle.

“Killer Inside: The Mind of Aaron Hernandez,” is a crime documentary released by Netflix that discusses Aaron Hernandez, a star player for the New England Patriots, and the crimes he commited.

A big part of the documentary was dedicated to mental health and another to Hernandez’s sexuality.

Hernandez’s high school quarterback and alleged high school boyfriend Dennis SanSoucie was interviewed. When asked about being closeted he said, “And the few [football players] that were, I used to feel like, ‘Golly, what a homo. Here I am, the football player.’ I was in such denial … because I was an athlete.”

This example is emblematic of a larger problem. Toxic masculinity is a massive issue present in the American football industry, and this hurts the players’ mental health and makes normal, acceptable things such as being queer seem unacceptable.

The mindset that football is the cure to a lack of masculinity has become so common, even though it is far from true. Jim Harbaugh, the head football coach for the Michigan Wolverines, distinguished football as “the last bastion of hope for toughness in America in men, in males,” according to the Huffington Post.

There are many harmful problems in American football that end up giving players standards they should not be compared to. The physical side effects and the high chance of getting dangerous diseases have been kept in the dark for so long, allowing the NFL to uphold the ideology that football isn’t as threatening as it seems.

Football is one of the sports that bring families around the country together and highlights one of the better qualities of America. Queer NFL players have become more common and are breaking the unhealthy standards that are put on football players. Players such as Scott Frantz and  Ryan O’Callaghan continue to share their coming out story after retiring from the NFL while Scott Frantz, a football player for Kansas State, came out as bisexual and hopes to sign with a team in the NFL.

There is more work being done on CTE and prevention methods to better protect players and helmet designers are coming up with new designs that help cause less impact on the players when they fall.

Even with all of this work being done, more needs to be done. Toxic masculinity is still present and more youth football coaches along with football clubs should push the idea that football makes masculine men away. More awareness should be spread about the physical injuries that football players face and people should be educated on how to protect themselves while playing this high-risk game.