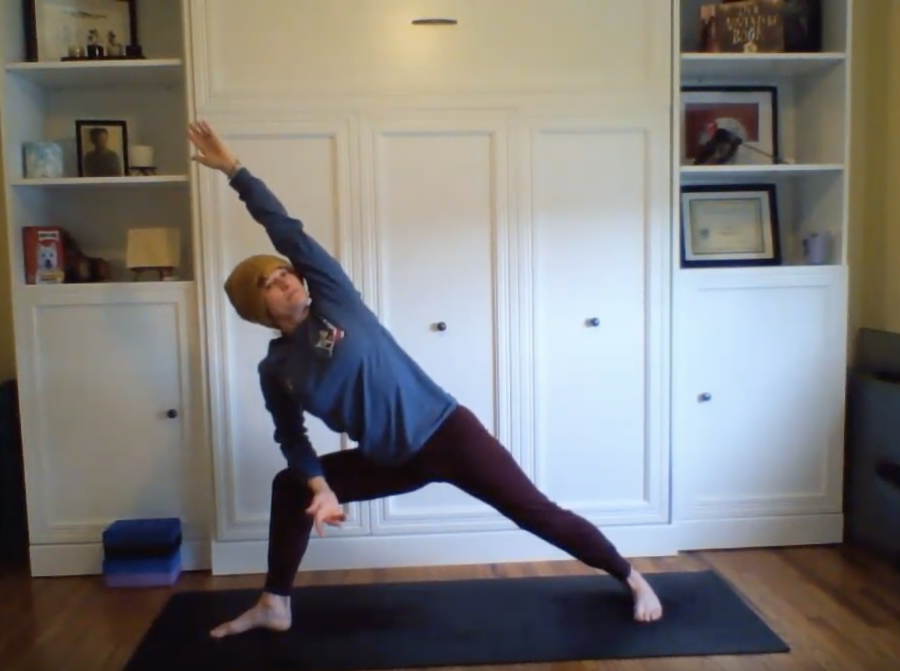 French teacher Kelly Ronsheimer has been posting daily yoga videos and sharing them with staff and students.

During the COVID-19 quarantine and shelter-in-place directives, French teacher Kelly Ronsheimer is spreading positivity by filming 10-minute yoga videos and uploading them to YouTube, daily.

“Whenever I record [the videos], it’s the highlight of my whole day,” Ronsheimer said.

Ronsheimer said she loves making these videos, both for herself and also to feel connected to her students and coworkers, whom she hasn’t seen since the pandemic’s outbreak.

Ronsheimer said each video is a little bit different and she goes into every video with a very broad idea about what she plans on doing and then lets the ideas flow as she goes.

In every video, she said she tries to build off of what she did in previous videos and tries to add one new skill each time.

“Today, I filmed a video with chair poses and then I filmed half sun [a practice in yoga incorporating a sequence of twelve linked positions, adding reclining, standing, inverted, twisting and balancing poses],” Ronsheimer said. “In later videos, I moved to full sun salutations.”

In other videos, Ronsheimer incorporates warrior poses and chair poses, as well.

“I’m trying to make it so that if you come in on any video, it will be easy to follow along. But if you start at the beginning, you’ll feel the build up,” Ronsheimer said.

Ronsheimer said she has received many compliments and positive remarks from viewers, including students, friends and coworkers.

Japanese teacher Junko Birdsong said she has expressed much gratitude and praised Ronsheimer for her videos.

“It is an amazing idea,” Birdsong said. “I think that students will feel connected to one of their teachers beside the academic work, especially in this situation; her extra positive work supports all of us. I really appreciate someone like her doing this.”

Birdsong said she has even shared Ronshimer’s videos with her Japanese students as part of the class’ weekly “mindfulness” homework.

Like Birdsong, Ronsheimer also implements yoga into her class instruction. Every so often, when Ronsheimer notices students in her French classes appearing stressed, she leads her classes in some meditation, she said.

“She has such a kind soul and prioritizes her students’ mental health before anything else,” Kim said. “We always do yoga during class and I believe being relaxed and controlled is the root to greatness.”

Yet, Ronsheimer said practicing yoga everyday was not something she ever imagined doing. As a result of a spine injury over a decade ago, Ronsheimer was instructed to practice yoga as therapy.

“At the beginning I was like ‘Oh God what is this,’” Ronsheimer said. “I was really not wanting to do it because I was a runner, I liked to sweat [and] I like to [do] hardcore things. But [yoga] turned out to be something that I was not expecting at all.”

Now, after doing yoga for 13 years on and off, Ronsheimer said she considers it medicine. She said she struggles with anxiety and yoga relaxes her.

“It’s the light in my day. I miss my students so much. I really miss teaching,” Ronsheimer said. “I know it’s hard on the students to be away and it’s also been hard on the teachers. I can feel like I’m doing something extra for other people. It makes me feel really good.”

Check out Ronsheimer’s YouTube Channel, here. Her channel includes her daily yoga videos, as well as presentations and powerpoints for her French students.